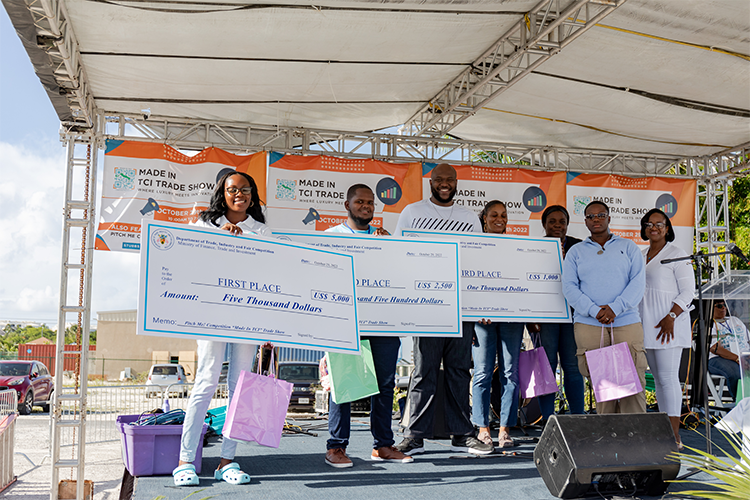 By Rosa M. Dion Last updated Nov 9, 2022
Share
The Department of Trade, Industry and Fair Competition hosted its first national show, “Made in TCI 2022”, at Stubbs Diamond Plaza in The Bight, Providenciales on Saturday, October 29, 2022.

The event was officially opened by Deputy Prime Minister and Minister of Finance, Investment and Trade, Jay Saunders.

Additionally, the event aimed to showcase the work of several government departments and agencies involved in business development, as well as domestic and international trade facilitation in the Turks and Caicos Islands.

In order to be considered for the exhibition, companies had to meet several criteria, including being Turkish-owned or controlled and maintaining a current TCI business license. With regard to the sale of goods, companies had to demonstrate that the goods to be displayed had been wholly or partially processed in the Turks and Caicos Islands. With regard to the sale of services, companies had to demonstrate that a significant part of their activities were carried out under the jurisdiction of the Turks and Caicos Islands.

Thirty companies and six government entities received credentials to participate in the Made in TCI 2022 exhibition. The objectives of the exhibition were as follows:

During the exhibition, the Department of Commerce launched its Made in TCI 2022 exhibitor brochure, which contains general and contact information for all exhibitors as well as participating departments. This brochure can be viewed on the Ministry of Commerce website:

www.gov.tc/trade or accessible by scanning the attached Made in TCI logo QR code.

Besides the exhibition, several other activities were part of Made in TCI 2022. A panel discussion titled “Giants are Made in TCI” was held as part of the morning session. In this segment, three local entrepreneurs who have achieved high levels of success in their respective businesses shared their experiences and advice.

Additionally, there was a “Pitch Me!” Competition. This competition aimed to encourage start-ups and MSMEs interested in expanding their business to present their development plans to seasoned business owners and industry leaders. A total of 19 individuals/companies registered to participate in Pitch Me! However, on the day of the event, five shortlisted competitors pitched their business plans to the following judges: Angela Musgrove of Invest TCI, Stan Hartling of The Hartling Group, Dorika Talbot of the Inland Revenue Department and Ronald Saunders of TCI Chamber. Trade.

The winner of the Pitch Me! The competition was Cherline Dabel of Aunty Nann’s Homemade Delights in Grand Turk, who won $5,000 for market expansion plans with a vision to become the leading supplier of homemade ice cream in TCI. The first runner-up was Dekkel Simmons of Auntie P’s Homemade Collection, who won $2,500 for market expansion plans for his local confectionery business tied to Salt Cay Island treats. The second runner-up was Jago Moore of Moore Spices, who won $1,000 to produce an all-natural spice blend of salts, herbs and spices from the Turks and Caicos Islands.

A singing contest known as “Singers are Made in TCI Too” was held to encourage participation from individuals in the creative industry. Six contestants entered the competition in hopes of winning a cash prize of $1,000 and a 12-hour studio recording session at Paradise Beachfront Production Studios. The judges for this competition were: AJ Alexander Parhm, Andy “DJ Shakes” Williams and Gregston Been. As more and more individuals engage in the creative industry, it is important to recognize and uncover this growing potential as it can lead to increased trade in services.

The Department of Commerce plans “Made in TCI” to be an annual event where individuals and businesses come together to showcase the range of talent and entrepreneurial creativity that exists in the Turks and Caicos Islands. It is hoped that the event will encourage and propel innovation, hence the use of the tagline: “Made in TCI…where luxury meets innovation”.

LiSEC – Right in the middle of the international show action

Delhi International Trade Fair 2022: How to Book Tickets, Date, Timings, Ticket Prices and Everything You Need to Know