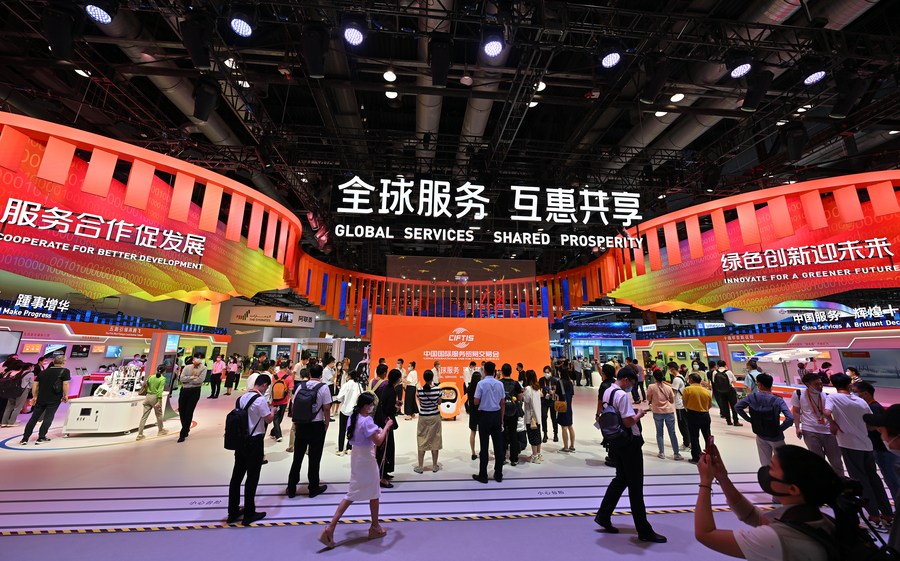 * The six-day event is one of the world’s largest and most comprehensive trade shows for services. Preliminary statistics show that this year’s CIFTIS saw a total of 1,339 projects and contracts concluded.

* Data shows that the cumulative value of China’s services imports reached US$4.3 trillion over the past decade, creating nearly 18 million jobs for its global trading partners.

Under the theme “Cooperate for Better Development, Innovate for Greener Future”, CIFTIS 2022 featured greater internationalization, with the participation of over 7,800 online companies and over 2,400 in-person companies, including 507 industry-leading companies and Global Fortune 500 companies.

A total of 71 countries and international organizations exhibited at the show this year, with the total exhibition area increasing by 20% from last year to 152,000 square meters.

The six-day event is one of the world’s largest and most comprehensive trade shows for services. Preliminary statistics show that this year’s CIFTIS saw a total of 1,339 projects and contracts concluded.

“CIFTIS has been successfully held this year despite the impact of the COVID-19 pandemic and other adverse factors, once again demonstrating China’s confidence and determination to promote high-level opening up and contribute to the prosperous development of world trade in services. “said Wang Zhihua, an official with the Ministry of Commerce (MOC).

CIFTIS 2022 emphasized green development as part of the country’s efforts to achieve its peak carbon and carbon neutrality goals, creating an environmental services section for the first time.

Covering an area of ​​16,700 square meters, the section focused on topics such as low-carbon energy, climate and carbon economy, carbon neutrality and green technologies.

The venue for this new section made innovative use of digital technology demonstrations, such as blockchain, 5G, cloud computing and Internet of Things demonstrations, as well as smart exhibition platforms.

Focusing on green, low-carbon and sustainable development, CIFTIS 2022 organized 24 environment-related forums and events to explore the path of global cooperation in green development.

“Green transformation is the general development trend of the global service trade industry,” said Zhuang Rui, a professor at Beijing University of International Business and Economics.

“At a time of global warming and frequent occurrences of extreme weather, emphasizing green development at this year’s CIFTIS is particularly meaningful,” Zhuang said.

From knives and forks to bicycles and drainpipes, a surprising range of bamboo exhibits drew many visitors to the booth run by the International Bamboo and Rattan Organization (INBAR).

A visitor tries out a bamboo bicycle at the environmental services exhibition during the 2022 China International Trade in Services Fair (CIFTIS) in Beijing, capital of China, Sept. 3, 2022. (Xinhua/Li Xin)

“Bamboo is a green, low-carbon, fast-growing and biodegradable biomass material, which can replace plastic in many fields. Today, more than 10,000 kinds of bamboo products have been developed in areas such as clothing, food, housing and transportation,” said Fu Jinhe, head of INBAR.

“Our booth at last year’s fair was only 60 square meters, and it increased to 120 square meters as we have more partners this year,” Fu said.

The GEOVIS carbon emission monitoring platform, jointly developed by Tsinghua University and Geovis Technology Co., Ltd., a Beijing-based high-tech company that focuses on the research and development of terrestrial digital products, has also presented at CIFTIS 2022.

Tu Ruihe, head of the UN Environment Program China Office, said China’s practices and experiences in promoting a green and low-carbon transition are of global significance.

“We look forward to China’s continued efforts to reduce pollution and carbon emissions, and share its successful experiences with other developing countries, especially those along the Belt and Road,” he said. said you.

Noting the opportunities presented by the event, more foreign companies are actively participating to expand their presence in China.

Amazon Web Services, which attended the show for the second time this year, showcased pioneering solutions in a dozen industries, including medical services, smart manufacturing and gaming.

The American company Qualcomm has participated in the show for three consecutive years. This year, the company showcased 5G, artificial intelligence and other technologies and their applications in sectors such as manufacturing and automotive.

During this year’s show, Air China and British engineering giant Rolls-Royce announced the establishment of a new joint venture covering engine maintenance, repair and overhaul in Beijing, with a registered capital of 190 million US dollars.

Launched in 2012, CIFTIS has become one of China’s flagship platforms for promoting openness and international cooperation over the past decade.

As part of efforts to further align with international trade rules and facilitate the growth of trade in services, the country has shortened its negative list for foreign investment for five consecutive years.

China also continued to advance its adherence to the Comprehensive and Progressive Agreement for Trans-Pacific Partnership (CPTPP) and the Digital Economy Partnership Agreement (DEPA).

Data shows that the cumulative value of China’s services imports has reached US$4.3 trillion over the past decade, creating nearly 18 million jobs for its global trading partners.