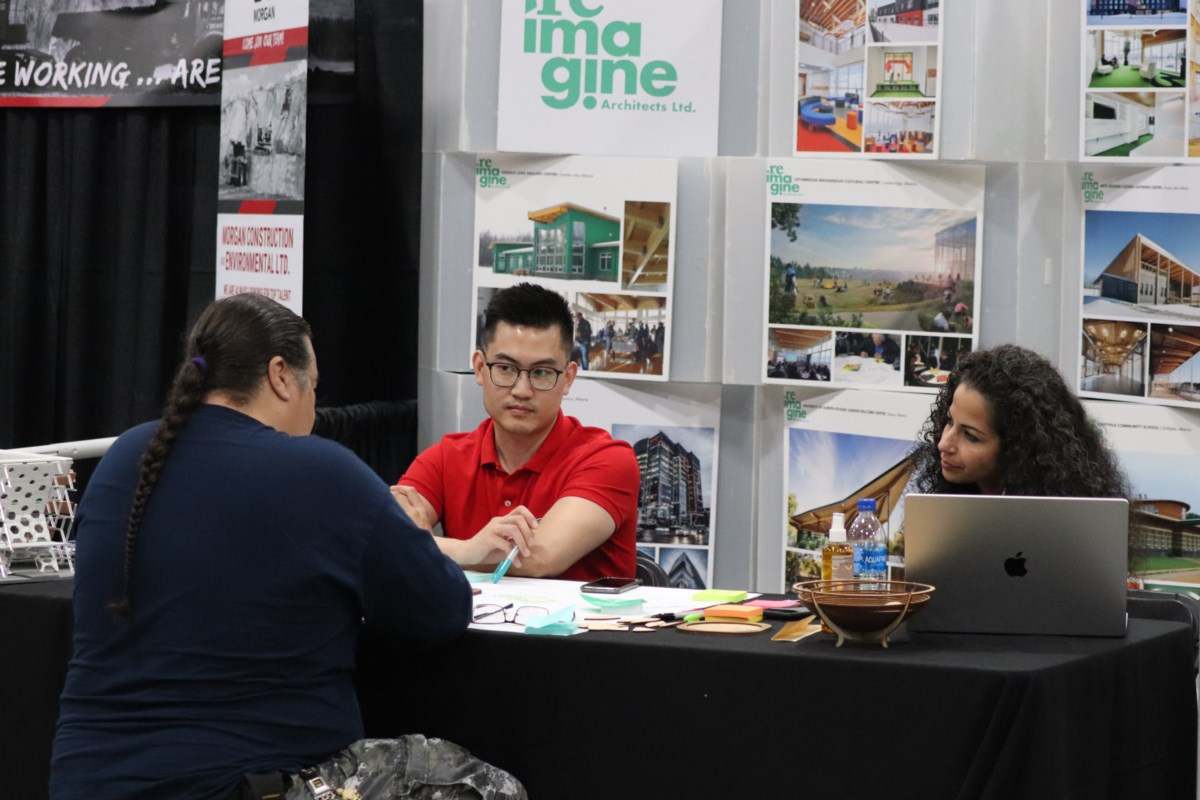 The Saddle Lake Career Fair and Trade Show on August 25 saw various organizations offer potential opportunities to job seekers. Tables were also set up at the Manitou Kihew Arena to showcase an assortment of merchandise from local small business owners.

Tanis Redcrow, Career Fair 2022 coordinator, said the event went well and was a step towards normality, given the COVID shutdowns over the past two years. The event was well attended with over 55 organizations and vendors attending the job fair and over 15 vendors at the trade show.

“On the lounge area, [tables] were offered free to sellers so they could come and make a little profit and show off their wares,” Redcrow said. “With the job fair, we had a lot of turnout and one of my hopes is that we get a lot of jobs after that.”

The Christian Labor Association of Canada (CLAC) is a union representing a variety of companies in multiple industries. The group was on hand to promote skilled trades and apprenticeship pathways. Kari-Anne March of CLAC said there is a massive demand for skilled workers across Canada due to the retirement of a large portion of the workforce.

“We need young people to see the skilled trades as a viable career option, not just a secondary back-up plan,” March said.

Vinette Kooger, also from CLAC, said she is motivated by the large pool of Indigenous youth in Alberta, particularly in Treaty 6 territory. can provide skilled trades workers.

Among the companies present at the job fair was Peyasew Oilfield Services. The company provides training on heavy equipment. Gabe Collins, the company’s construction manager, said: “The skills we teach students are basically how to operate and understand the equipment.”

He explained that students get hands-on experience with a variety of heavy equipment, as it is difficult for people to enter some industrial enterprises without prior experience.

On the other side of the job fair, vendors, including Jilleon Steinhauer, were selling a variety of merchandise. Steinhauer said, “We sell pearl jewelry, bags, skirts, we have beanies, and just a lot of jewelry.”

“We’re starting our programming for the fall semesters and we’re going to have after-school drop-in programs,” Harrison said. “We are hiring new staff for after-school programs, restorative justice staff, and hopefully we can set up programs for kids here.

Commenting on the success of this year’s job fair, Redcrow said: “I hope it’s something we can continue to do as we’ve opened up to everyone. She said she was grateful to everyone involved, suppliers, employers and recruiters, as well as the public.

“Especially here in Saddle Lake, not everyone has access to the internet, and they don’t see what kinds of businesses and organizations are there,” she explained. “It opened the door for them to let them know that these people are out there looking for a job.”