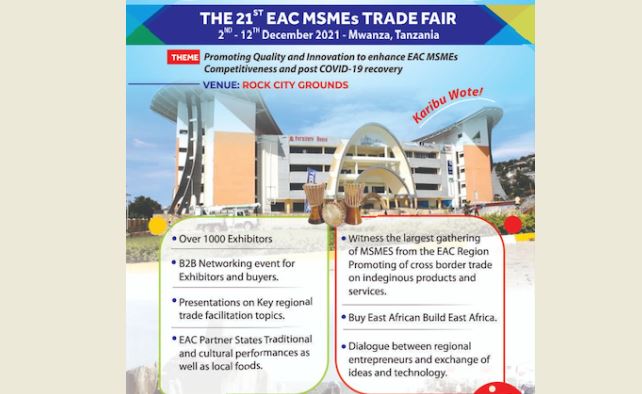 Various delegates from the city of Mbarara, including the mayor of the city, Mr. Robert Kakyebezi and other stakeholders, attend the 21st East African Community (EAC) Micro, Small and Medium Enterprise Fair in Mwanza, Tanzania.

These were sponsored by the Hon. Mwesigwa Robert Rukaari, MP for Mbarara North.

The EAC Trade Fair for Micro, Small and Medium Enterprises (MSMEs) is also known as the Jua Kali / Nguvu Kazi Exhibition among Swahili speaking countries. It started on December 12 and is scheduled to end on December 12.e.

The exhibition on the theme “Promoting quality and innovation to improve the competitiveness of EAC MSMEs and post COVID -19 recovery” is expected to attract more than 1,500 artisans from the six EAC partner states; the Republics of Burundi, Kenya, Rwanda, South Sudan, Uganda and the host country, Tanzania.

The 1st EAC MSME Trade Fair was held in Arusha, Tanzania, in November 1999 during the historic event of the signing of the Treaty for the Establishment of the East African Community.

Following the success of the Arusha Expo, the heads of state of the EAC ordered that the exhibition be held annually in rotation among the partner states in order to enhance and reorganize the socio-economic integration of the peoples. from East Africa.

The 20th edition of the MSME fair was successfully held in Kigali, Rwanda, in December 2019, where more than 1,000 exhibitors participated.

Over the years, the Region has seen more and more traders formalize their activities, add value to their products, develop and conquer new markets.

How Dubai Watch Week is changing the game of watch shows