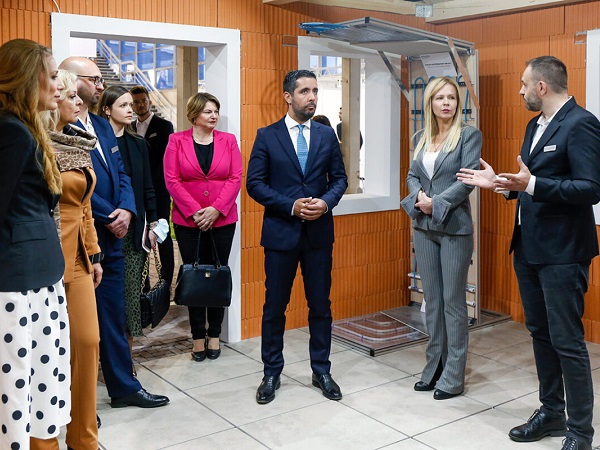 From April 27 to 30, in halls 1, 1A, 2, 3, 3A, 4 and in the open space of the Belgrade Fair, the main event of the Fair of the construction industry in the region of South East Europe will take place, and this year The motto is “The future in construction”.

During the opening ceremony of the Building Fair, the Minister of Construction, Traffic and Infrastructure Tomislav Momirovic expressed his satisfaction to open this event in the year of the jubilee of the Belgrade Fair, the 85th anniversary of its existence.

“There is no more important event that will show Serbia’s economic development and progress than this fair. And the motto of this year’s Fair “Future in Building”; talks about the mindset and ambition that we all have in this industry. Two years are behind us in which the construction in Serbia has shown that it can withstand challenges and demonstrate a high level of efficiency and work, and above all, to provide a secure income from investments,” said The Minister.

“We are laying the foundations for the future and the continuation of the historic wave of investments in the Serbian construction sector. This is an opportunity to see what domestic and foreign construction, architects, designers have to offer, for us to learn and implement the most professional and modern standards of planning, design and construction “, did he declare. “The Government will do everything to allow the functioning of the sector to take place without hindrance. We have an extraordinary foundation, and the construction of the Belgrade – Novi sad high-speed railway confirms this. For this opportunity, a large number of engineers were needed, the railway was built by about 150 companies, 120 of them including 120 from Serbia, and about 10,000 workers from Serbia were hired to work on this project. The epilogue are the references for participation in other similar projects in the country and abroad”;

“The government will”, underlined Momirovic, “continue the construction of the fast railway to Budapest and to Nis, the highways through Serbia, to raise the capacities of the port infrastructure. As part of the construction plan of the communal infrastructure, over the next 5 years we are expected to build 7,000 kilometers of sewage infrastructure and more than 250 sewage treatment plants, all of which we will achieve through the implementation of construction projects modern and ecologically sustainable”.

Ambassador of the Kingdom of the Netherlands to Serbia, Joost Reintjes, recalled that “when we think about building and construction, we create images of tall buildings, apartments, glass, steel, concrete and stone, as if it were the 50 shades of grey”.

He recalled that in the Netherlands, a country that leads in the refinement of landscape architecture, “implemented in this image plants and flowers, green walls, roofs and facades, and this because the greatest challenge of the 21st century – climate change and air pollution.These are the main challenges that we face today and that we must oppose through new building materials and the sustainability of the built space. The influence of all this will first be local, will be felt in Belgrade, Nis or Smederevo, but also in Amsterdam, Rotterdam or The Hague”.

The ambassador said that “at this event, visitors will be able to see a green segment, where Dutch companies present how green landscaping can improve the quality of life, and the benefits we will derive from green cities. will have both health and overall benefit in terms of the city’s temperature and pollution, it will increase biodiversity, and even the value of real estate will increase.

The Netherlands will launch a “Green Cities in Serbia” project in May, within the framework of which a large delegation will visit the Netherlands, together with representatives of the international community. The goal is to make cities in Serbia more beautiful, sustainable and livable”.

Ivan Vujisic, the representative of Wienerberger Serbia, the general sponsor of the building fair, the leader in system devices for modern construction, the highest quality throughout Europe, expressed his satisfaction to be able to contribute to the smooth running of this event and said that Wienerberger will offer all of these innovative things that exist globally. “Because everything that exists in the world today is possible to find at this Fair”.

Road show organized in the city to promote the EXCON exhibition