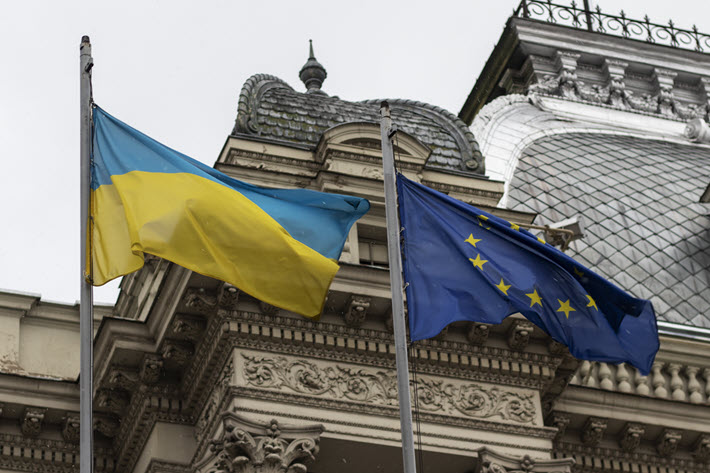 Presence of Ukraine at the show

Two programming events at the London Book Fair will have a particular bearing on Russia’s aggression in Ukraine.

Ukraine’s flag flies next to the European Union flag in the western city of Lviv on March 8. Image – Getty iStockphoto: Serhii Ivashchuk

In some of the most recent developments in Vladimir Putin’s unprovoked assault on Ukraine, with Joanna Sugden and Drew Hinshaw at the wall street journal reporting today (30 March) that the exodus of refugees from the beleaguered country has exceeded 4 million people.

Ellen Francis with the Washington Post reports that Ukrainian officials in Chernihiv claim that Russian forces struck the area today, just after Moscow’s pledge to reduce military activity there, and BBC News writes that Putin demanded the surrender of Ukrainian troops before his army stopped shelling the devastated city of Mariupol.

Publication prospects asked the administration of the London Book Fair (April 5-7) where in the fair the nightmare of the Russian invasion of the country might be reflected. Last week, as you will recall, there was a series of major reports related to violence at the Bologna Children’s Book Fair in Italy, the first of the major international events of the season.

And now we learn that the Ukrainian Book Institute is to exhibit on the Great Hall Gallery of the Olympia in London.

We see the entry in the exhibitor directory placing the venue at 2B05, which organizers say is near the press office.

Indeed, the producer Reed Exhibitions Ltd. (“RX”) offered its booth free of charge to the Book Institute and helped set it up. We are told the stand was designed and will be manned by members of the Ukrainian Book Institute team based in London.

It is also expected that the UNHCR office (the United Nations High Commissioner for Refugees) will be on hand at London’s Olympia as part of a fundraising effort for Ukrainian refugees and displaced people in many parts of the world. This effort is here courtesy of RX.

We are also directed to two events in the show’s programming of interest relating to violence in Russia.

Description: “As the world reacted by condemning the Russian-Ukrainian war, many in the international publishing community sought to understand what they could do and how they could effectively offer help and support during the crisis. . This seminar, organized by the Association of Publishers, examines the role of publishers and cultural industries at large during a global conflict. He will highlight some of the publishing industry’s specific initiatives and responses to the Ukraine crisis, hearing from publishers, industry bodies and the UK government.

“More broadly, it will examine how culture can play a role during difficult times of global conflict, and what this means in practice.”

As of this writing, it looks like pieces of that program are still coming together.

It is hoped that this event will take the form of a round table. The London Book Fair’s “What’s On” pages list the participation of TV broadcaster Georgina Godwin and PEN Ukraine President Andrey Kurkov, but Publication prospects understands that these details do not seem to be fully confirmed yet.

Follow our coverage of Vladimir Putin’s war on Ukraine and its impact on the country’s publishing industry and international industry reactions.

Publishing Perspectives is the global media partner of International Association of Publishers.

To learn more about the COVID-19 coronavirus pandemic and its impact on international book publishing, click here

Porter Anderson is a non-resident member of Trends Research & Advisory, and was named International Business Journalist of the Year at the London Book Fair’s International Excellence Awards. He is editor of Publishing Perspectives. He was previously associate editor of The FutureBook at The Bookseller in London. Anderson was a senior producer and anchor for CNN.com, CNN International and CNN USA for more than a decade. As an art critic (National Critics Institute), he has collaborated with The Village Voice, the Dallas Times Herald and the Tampa Tribune, now the Tampa Bay Times. He co-founded The Hot Sheet, a newsletter for authors, which is now owned and operated by Jane Friedman.

Hamburg gets a new “Polaris” lounge for the gaming scene