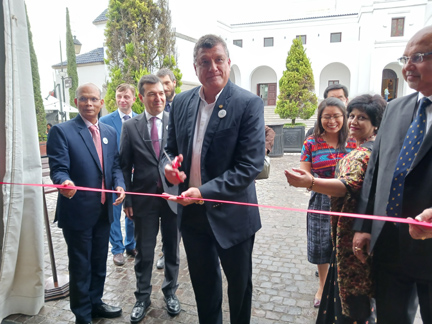 IS Saluja in Guatemala City

CAYALA TOWN, GUATEMALA (TIP): The Indian Embassy in Guatemala. hosted an impressive Indian Handicraft Trade Show from September 22-24, 2022 in Cayala City, Guatemala. The 3-day exhibition, organized by the B&S Foundation and the Export Promotion Council of Handicrafts, India was inaugurated on September 22 by the Acting President of the Republic of Guatemala, Mr. Guillermo Castillo Reyes who, in his brief speech , congratulated the Indian Ambassador to Guatemala. Mr. Manoj Kumar Mohapatra for bringing Indian artisans to showcase their talent and products in Guatemala. In attendance were elected representatives and officials of the Guatemalan government, as well as diplomats from various countries.

The exhibition was part of the celebration of 75 years of India’s independence, celebrated as Azadi ka Amrit Mahotsav.

Acting President Guillermo visited each of the stalls and watched the magic of the gifted hands that had woven the magic and talked with the artisans about their arts and crafts. He was kind enough to spend time at each of the stalls and interact with the artisans and let them take a picture with him. Craftsmen gave him souvenirs. India’s Ambassador to the Republic of Guatemala, Mr. ManojKumar Mohapatra. suggested to the acting president to send artisans from Guatemala to India to interact with Indian artisans and explore a market for their products.

A day before the trade show, the Indian Embassy held a fashion show in which models showcased Indian textiles and dresses. The two-hour fashion show was immensely appreciated by the gathering which included, among others, Ava Arevalo, Deputy Foreign Minister for Cultural Affairs, and diplomats from several countries. A day after the inauguration of the trade exhibition, the Indian Ambassador, Mr. Manoj Kumar Mohapatra hosted a dinner at which the Acting President of Guatemala was the main guest. Among the guests were ministers and officials of the Guatemalan government and diplomats from various countries, artisans from India and members of the community of Indian origin.

Addressing the gathering, the Indian Ambassador spoke about the areas of cooperation between India and Guatemala and called on the government of Guatemala for a mutually beneficial alliance in the areas of trade and commerce.

The Embassy of India in Guatemala also organized a Yoga session for schoolchildren. In the picturesque town of Panajechel on September 24. About 40 enthusiastic students participated in the yoga session. I was quite surprised to find yoga in schools in Guatemala. Ambassador Mohapatra told me that the embassy regularly organizes yoga camps. It was obvious that the Indian Embassy had popularized Yoga in Guatemala.